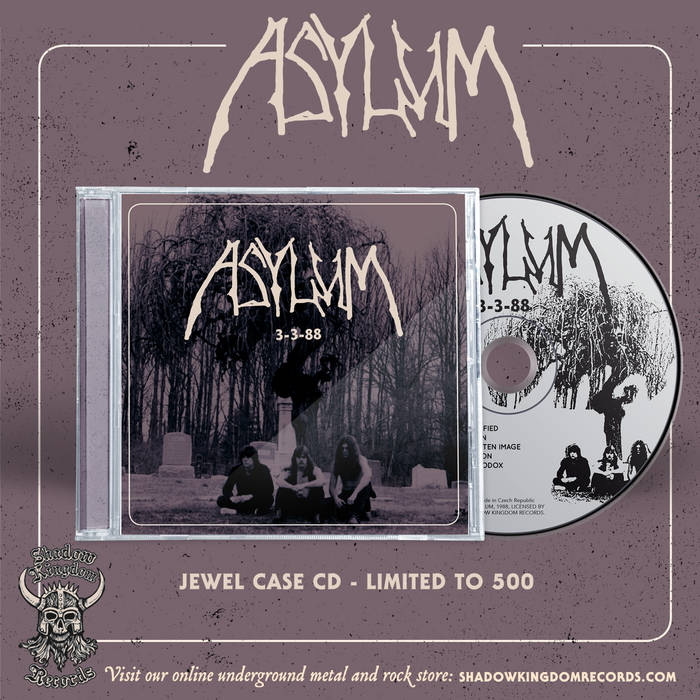 Formats (CD Only) - No Bandcamp. Digital will be released by the band some time later.

Order the CD at www.shadowkingdomrecords.com

Doom aficionados are well familiar with the name ASYLUM by now. Begun in 1981 and crafting a handful of super-cult demos during the lean years of the 1980s, ASYLUM eventually became UNORTHODOX in 1992 and released their classic debut album, fittingly titled Asylum, that year on the pivotal Hellhound label. As such, ASYLUM had a big hand in shaping the Maryland doom metal scene that would come to fruition in the '90s and sow its influence worldwide.

But, with the long-lost 3-3-88 recording now unearthed, we begin to see the full depth of ASYLUM's eventual transformation into UNORTHODOX. This recording was indeed recorded on March 3rd of 1988, and was the last-known recording under the ASYLUM moniker. Across its 10 tracks, the listener can feel the full force of the band's ever-expanding biker rock base, which would later become a hallmark of Maryland doom. Whereas so much doom to come would take heavy cues from Black Sabbath, ASYLUM instead had more of a Steppenwolf-gone-metal feel, and as displayed by 3-3-88, a penchant for jamming out into spacier realms, including touches of otherworldly synth. And yet, for all this increased ambition - four full instrumentals mark this recording, including the portentous "Unorthodox" - the band's sound remained remarkably focused, with a clear vision and even clearer execution. You can drift off into far-away lands as easily as you can headbang to this.

Pulled from the original tapes and remastered, ASYLUM's 3-3-88 possesses an enduring power which has made it such a highly-sought-after recording all these years. And whether they transformed into UNORTHODOX or not, this crucial document deserves its rightful place in the doom pantheon.

As the 1980s were progressing, so was ASYLUM, the hooks becoming more acute and the rhythms sending the mind to an almost out-of-body experience. The ASYLUM sound was getting ever so close to what would become UNORTHODOX. Dale’s ruminating guitar sound and Ronnie’s precise drum attack were finding their way. The addition of Taurus synthesizer pedals by bassist Earl Schreyer provided an intoxicating effect on several tracks.

The recording of 3/3/88 and mastering by engineer Chris Kozlowski could not have been better. With several weekly rehearsals, the band became even tighter. ASYLUM managed to pull off the complete demo you are about to hear with no overdubs or extra tracks, somehow almost flawlessly. Give a listen ~ Ronnie Kalimon – March 2018

Mille Petrozza stops by to talk about the new Kreator album, plus music by Trauma Bond