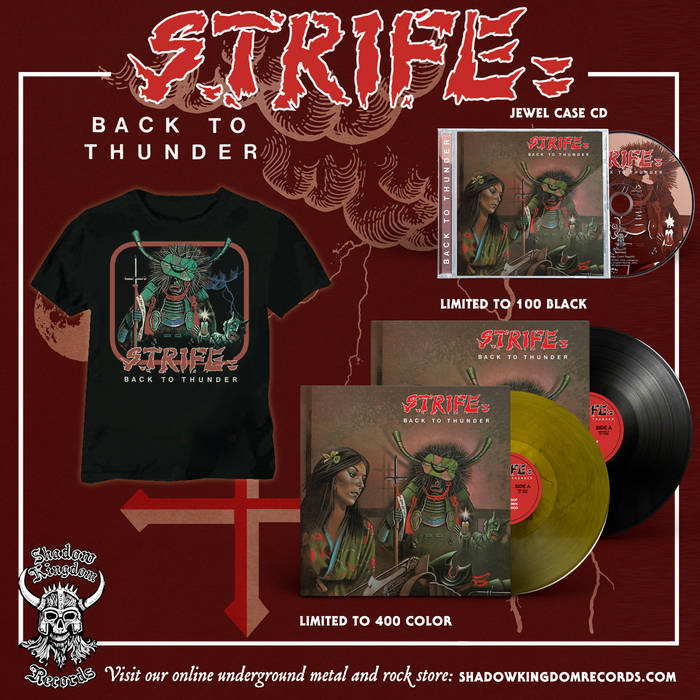 paul rote I passed on this band back in the day .
But now I like this style . Favorite track: School [School EP 1977].

This is the 1978 sophomore album by the terrific British hard rock band STRIFE, a seminal influence on IRON MAIDEN and many others. By this point, the band had shifted to the smaller Gull Records, which had released JUDAS PRIEST's first two albums only a few years earlier. Although conventional underground wisdom has always stressed their 1975 debut (likely because it was on Chrysalis), "Back To Thunder" is, in the opinion of many, at least as good - if not better!

The album improved on their debut on several fronts, not least of which is the stellar production: the guitar tone is nicely crunchy, especially for its time. The technical performance of all musicians in the band – always a high point with STRIFE – had progressed in the intervening three years, as well. Songs like "Shockproof" and "Feel So Good" hit the listener with high-energy riffing and skill right out of the gate; the band delivered rock here as good as any contemporary heavy UFO, NAZARETH, or BUDGIE work. However, STRIFE retained a great deal of their progressive tendencies, as well; special mention must go to "Let Me Down," a doomy break-up song as good as any similarly themed THIN LIZZY number. The bass performance on this record particularly shines, but I don’t want to ruin any surprises. If you don't dig this, you just might be shockproof, with skin as thick as a brick. Crank It!

Metalheads and all rock fans will not be disappointed purchasing this fully band-authorized deluxe reissue produced directly from the source tapes, confident you will encounter a great and beautiful band that once ruled that holiest cradle of our genre and subculture: the UK club scene of the 1970s.

The VINYL version will be identical musically to what was produced originally except for the enhanced sound. The CD version will have four bonus tracks. The first bonus track was an unreleased song that could not fit onto the album originally. Two of the other songs are from their 1977 EP, and the last bonus track is another unreleased song called "Unknown." Both versions will have updated original artwork, but enhanced and redesigned more in line with how the band would have wanted it to look like originally.