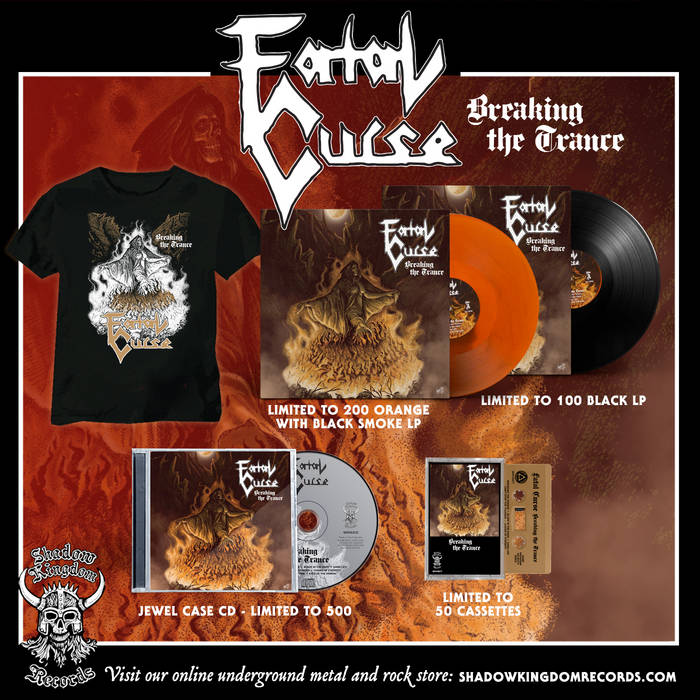 We would like to reward the fans that support physical product and we'll be doing the following:

In Store Physical Copies, and Digital will be available on April 19, 2019

Hailing from New York, FATAL CURSE are a veritable throwback to earlier, simpler times. Theirs is a roots-oriented sound squarely focusing on early speed metal on both sides of the Atlantic and America's contemporaneous power metal movement. No thrashing like a maniac here: FATAL CURSE create classy 'n' cruising anthems of ageless heavy metal might on Breaking the Trance!

Indeed, much of FATAL CURSE's flash 'n' finesse stems from their power-trio lineup, with each member locked in to the other and pumping out seamless, gleaming-chrome odes to such timeless topics as "Blade in the Dark," "Priestess of Fire," "Chains of Eternity," and "Eyes of the Demon," among others. Nope, you "Can't Stop the Thunder" here, especially those lightning-explosive yet narrative leads at the hands of guitarist Dave Gruver.

From later Thin Lizzy to Tokyo Blade in the prime, early Virgin Steele to early Jag Panzer, Borrowed Time-era Diamond Head to Witch Cross' Fit for Fight, Liege Lord to Omen to Helstar and beyond: step onto the wayback machine with FATAL CURSE and start Breaking the Trance!