Death Has No Calling Card 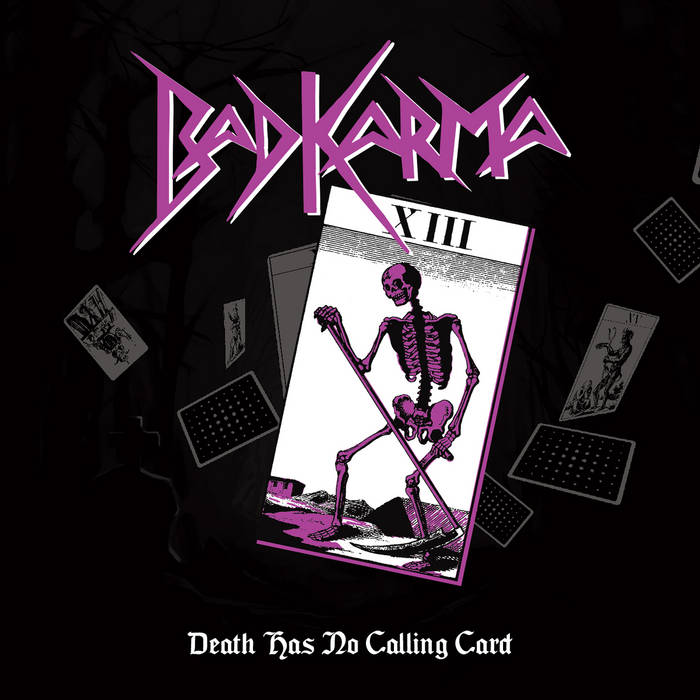 SHADOW KINGDOM RECORDS is proud to present a long-overdue collection of American thrash/speed metal cult BAD KARMA, entitled Death Has No Calling Card. Formed in Boston in 1985, BAD KARMA recorded a three-song demo, also titled Death Has No Calling Card, in 1988. From there, it would seem the band either broke up or went on a long, indefinite hiatus afterwards, but in fact, BAD KARMA recorded a five-song second demo in 1990 and then another three-song demo in 1999. All three demo recordings are conveniently collected here, as SHADOW KINGDOM has been a longtime fan of the band and feel BAD KARMA truly never got their due!

Hopefully, that should all change with the release of the Death Has No Calling Card collection. Infused with the true-as-steel spirit of the American thrash and speed metal scenes of the '80s, BAD KARMA wove a rich 'n' powerful tale with their sparse-yet-stellar discography. Their first three-song demo, from which this collection takes its title and for which most tape-traders knew the name BAD KARMA, displays a young 'n' hungry band who were able to take the fervent thrash style of the day and imbue it with the moodiness and daresay class of speed metal's biggest players. Even though it was just considered a "demo," the production on the original Death Has No Calling Card was exceptionally professional, and alongside the dark 'n' tragic songcraft, one could easily slot the recording alongside the likes of Master of Puppets and The Legacy. The band upped the stakes even more on the follow-up 1990 demo, going darker, heavier, and more twisted. Despite both thrash and speed metal becoming "uncool" during the early '90s, BAD KARMA's three-song demo from 1999 still sounds remarkably fresh, staying true to their signature style from the '80s and giving it a rawer and more direct update, with the band even taking a stab at Alice Cooper's "Billion Dollar Babies."

Most uniquely of all, perhaps, is the fact that founding vocalist/guitarist Alec Dowie was known for playing guitar entirely with his left hand, as his right hand had been crippled in a motorcycle crash in 1985. Nevertheless, one hand or fifty of 'em, BAD KARMA created a special, distinctly American sound, and in lieu of the band currently back in action, writing and recording their debut album, SHADOW KINGDOM is pleased to shine a long-overdue light on 'em. Because remember: Death Has No Calling Card!