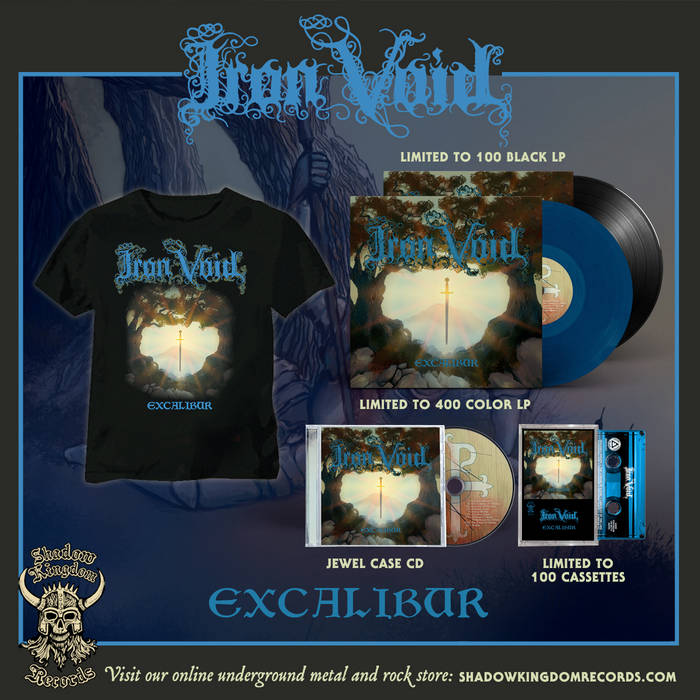 Ofer Mashiach Rather stripped-down and simplified compared to previous releases, but just as classic. I love the sound, I love the vibe - I just love this album. One of the best the genre had to offer in 2018. Favorite track: The Grail Quest.

SHADOW KINGDOM RECORDS is proud to present IRON VOID's highly anticipated third album, Excalibur. A mainstay of the UK doom metal scene, Excalibur is the album by which Iron Void will truly be launched onto the world stage. The album shall be released during the first quarter of 2018 via Shadow Kingdom.

Iron Void was originally formed by Jonathan "Sealey" Seale and Andy Whittaker (Solstice, The Lamp of Thoth) in 1998 in order to create an old-school doom metal band, worshiping at the altar of doom legends such as Black Sabbath, Saint Vitus, Pentagram, etc. The band reformed in 2008, with the current lineup consisting of Jonathan "Sealey" Seale (bass & vocals), Steve Wilson (guitars & vocals), and Richard Maw (drums).

With considerable live action in the past few years, and encouraged by the critical acclaim heaped upon Doomsday, Iron Void patiently set to work on Excalibur. Arguably the band's magnum opus, Excalibur is an epic behemoth of Arthurian legend, emitting an atmosphere that's truly medieval whilst sacrificing none of their trademark DOOMED-OUT heaviness. Here, across the album's massive yet strangely concise 48 minutes, Iron Void weave old-as-time tales of myth and magic, all set to rumbling, dramatically dynamic doom metal. The album is sequenced together with a subtle sort of mastery, taking the listener on a journey into centuries past, all concluding with the stark 'n' stirring acoustic closer "Avalon." As the final notes ring out, you'll be reaching for the calendar to check what year it is!

High fantasy in doom didn't die out with the much-beloved The Gates Of Slumber; it's simply been revived by IRON VOID with Excalibur. Long may their reign continue!