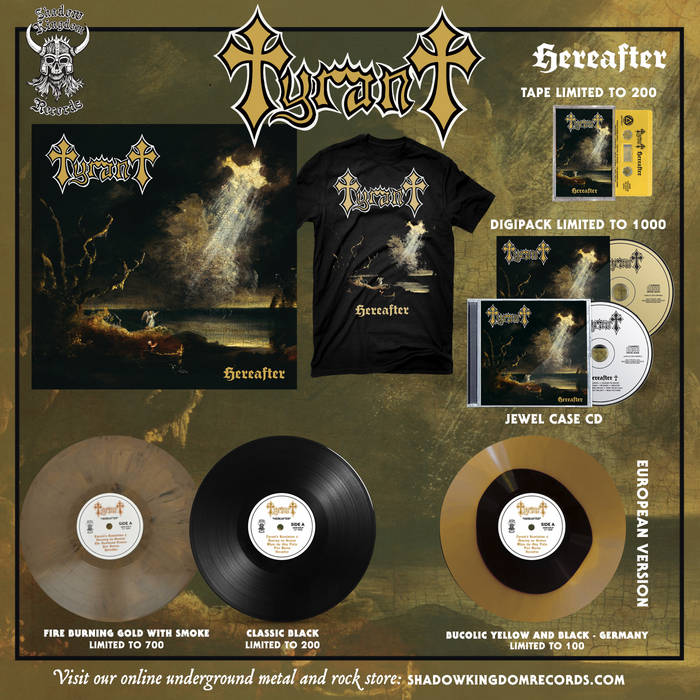 meshuggah59 Could not find a best album to remind thé greatest of mid 80's heavy metal just before the wave of Germany and speed/thrash américan bands.All songs are killers.the way i put the MC in my player to listen to this brings me back to a period without web and smartphone when life was really really better than now.You was so proud to come back from the music shop by bike with a New "import" album to listen to in your bag! thank you Tyrant Favorite track: Dancing on Graves.

nundo7704 🇺🇸💀🤘🏻 From start to finish this album kicks ass and never lets up. Many bands break up, take long hiatus or whatever and try to make a comeback album and few succeed and/or try to pick up where they left off and for the most part, there isn’t very many bands that has done it well but this monster of a album does exactly that and more. IMO this is one of the best comeback albums ever. And considering almost 25 years since the last recording. I can’t gush over this album enough. Favorite track: Until the Day.

David One of my favorite albums of 2020! Everything about this album is on point for me! Riffs! Solos! Drums! Vocals!
Buy this album! Favorite track: The Darkness Comes.

fuelberth75 Tyrant / Hereafter has cemented its place in my personal top 5 for 2020!!!

Pedro Roque Amazing work and a serious contender to be on the top 5 ranking of AOTY.
10/10 for me, only for the true believers!

Hailing from Pasadena, California, TYRANT formed in 1978 and put out their first demo in '82. However, it was with their pair of albums for Metal Blade - 1985's Legions of the Dead and 1987's Too Late to Pray - where they'd etch their name into cult heavy metal legendry. Proud and powerful, theirs was steel tempered in the purest and proudest tradition: neither NWOBHM nor speed metal nor doom nor hair metal by any strict definitions, but uniquely dipping that blade into all at any given moment, and given an almost medieval atmosphere considering the ever-changing stylistic landscape during those years, which would be deemed "old-fashioned" as the 1980s came to a close. It took nearly a decade for TYRANT's next album to arrive, 1996's King of Kings, and indeed were the band even more out of place in that landscape; despite staunchly sticking to their guns, this would be their otherwise-final album.

Just like TYRANT were when they originally formed so long ago, there existed true believers across the pond who were keeping the traditional metal faith alive as the '90s came to a close, as well as a quietly growing renaissance in the States as the 2000s began. TYRANT's catalog subsequently received a long-overdue reappraisal, and a new, younger generation of metalheads investigated their mysteries of steel. Although never "broken up" officially, the sleeping beast awoke, with the original TYRANT lineup reuniting for 2009's esteemed Keep It True festival in Germany. SHADOW KINGDOM, who've indeed kept it true since the beginning, reissued TYRANT's first two albums in 2018, furthering that reappraisal and bringing the band's name to an even younger, hungrier generation. The stage was thus set for a grand return...

At last, it arrives with Hereafter, courtesy of truest believers SHADOW KINGDOM. With founding member Greg May on bass along with longtime guitarist Rocky Rockwell and powerhouse drummer Ronnie Wallace, who's been with the band since 2010, TYRANT now feature a significant new addition on vocals: the one and only Rob Lowe, he of Solitude Aeternus and ex-Candlemass fame. His addition proves especially significant given TYRANT's doomier direction on Hereafter. While no doubt sounding like the same band who delivered those two classics on Metal Blade so long ago, the TYRANT of Hereafter conjures forth a classy, ominously melodic style of doom METAL - or at least traditional heavy metal steeped in doom, much like Black Sabbath in the early '80s with Dio and then Ian Gillan on the mic - with each of these 11 mini-epics headbanging forward with power, poise, and a stately sort of grace. Aiding that granite-thick surge is the production of one Bill Metoyer, the legendary producer who's recorded all of TYRANT's albums to date. Evading any sort of "retro" moves, Metoyer keeps the sound on Hereafter rich, robust, and above all timeless, just like TYRANT's ever-unyielding style of metal. Truly, this is the homecoming the legions have been waiting for!

To coincide with this momentous event, TYRANT will be headlining this year's New England Stoner & Doom Fest, performing the new album in its entirety along with a full set of classic material. In 2020 and beyond, long may TYRANT live Hereafter!