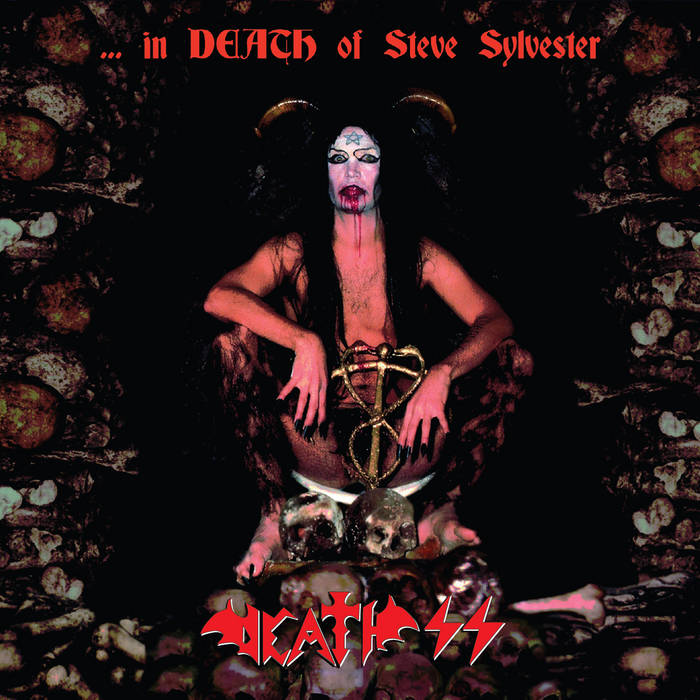 bcb723 Completely 100% classic debut from Italy's Death SS. Singer Steve Sylvester (hence the "SS"...) is just kind of out there. Like horror movie obsessed out there. As you can see from the cover, subtlety is not their forte. But these songs smoke, old-school style. Also, extra points for the stones to cover Alice Cooper's most fucked up song. An under-appreciated album with a lasting impact. Favorite track: Vampire.

W.P. Trve Kvlt! The first is their best in my opinion!

SHADOW KINGDOM RECORDS is proud to reissue DEATH SS's legendary debut album, ...In Death of Steve Sylvester. One of the most cult names in international heavy metal, Italy's DEATH SS have influenced thousands over the past three decades in their long, twisted history, equally influencing the nascent speed metal and black metal scenes with their trademark ghoulish and theatrical presentation. SHADOW KINGDOM couldn't be prouder and more honored to have DEATH SS amongst its roster, most of which have been shaped by the band in one way or another, and now unleash their most monumental works on CD, vinyl, and cassette formats.

Originally released in 1988, ...In Death of Steve Sylvester was quite unlike anything else around at the time. DEATH SS's foundation in '70s Black Sabbath and Alice Cooper was firm, but the way it emerged on their debut album put it into a league of its own. Intense and energetic and yet emitting an atmosphere fully suited to a horror movie, ...In Death of Steve Sylvester had one foot planted in the contemporary speed metal scene and another foot planted in a world seemingly beyond mortal comprehension. It was wild and weird and yet wholly heavy metal, and a stout reminder that unique inspiration breeds unique art. To cap their separation from modernity, the band cover their beloved Alice Cooper's "I Love The Dead" here.

Faithfully restored to its original sound and design, as per the band's specifications, hear DEATH SS's ...In Death of Steve Sylvester as it was meant to be heard!