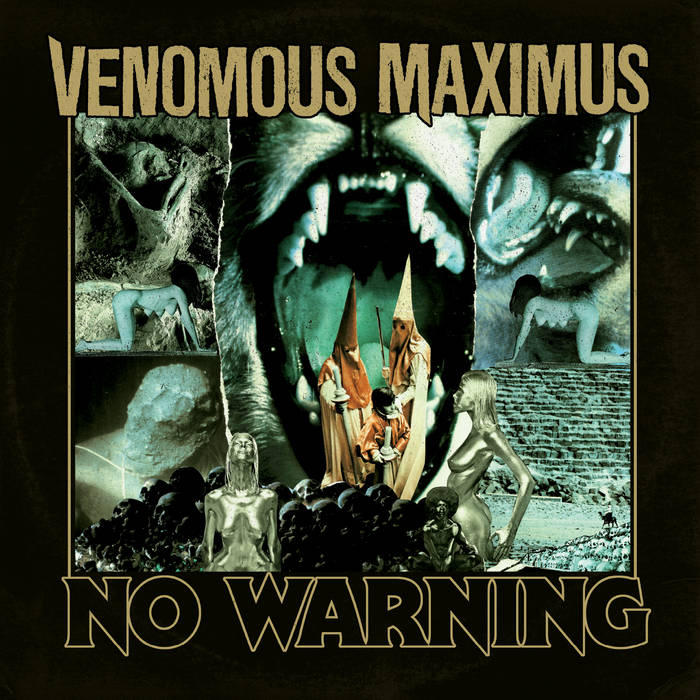 nickleass That's what I like about Venomous Maximus, I get older and they stay badass. Alright, alright. Favorite track: Return of the Witch.

mardingir No Warning is the best album from Venomous Maximus, yet! It flows from one song to the next, taking you along for a ride through this world full of illusions, allowing you to peer through the curtain. You will not be disappointed with this album. And if you are, what is wrong with you?!

VENOMOUS MAXIMUS are a Houston, Texas-based quartet who came to SHADOW KINGDOM's attention with their approach to attitude and will to play music with conviction without any genre barriers or any worries if they’re being "true" to the elite or cult fans that quickly dismiss anything after hearing 10 seconds of it. That uncompromising approach certainly paid off on Firewalker, where the band truly nailed not just "good" songs, but rather writing GREAT memorable songs that varied in length, tempo, and especially emotion. VENOMOUS MAXIMUS definitely had their sound down cold with their 2012 debut, Beg Upon the Light, but they were on to something really special with Firewalker.

Now, they've managed to trump that accomplishment with the staggeringly awesome No Warning. Everything that's been loaded up so far in the VENOMOUS MAXIMUS arsenal - heaving heaviness, haunting melodicism, sweaty grit, red-blooded swagger, rock-god vocals - is taken to 11 here, resulting in a clutch of ANTHEMS that sound almost effortless in their execution. Some will point to their approach as "occult rock" or some other trendy nonsense. We at SHADOW KINGDOM don't think so: in VENOMOUS MAXIMUS and especially on No Warning, you can hear traces of all the rich 'n' diverse songcraft Black Sabbath explored during the entire 1970s alongside a spacier, more psychedelic element that Roky Erickson accomplished in his solo career and also with the 13th Floor Elevators, but never without losing the granite-thick heft so special to classic heavy metal and hard rock. And yet, with this familiar-yet-foreign approach, the band bespeak their own personality, one that's now become undeniably and definitively VENOMOUS MAXIUMUS. It's timeless through and through, as powerful songwriting always wins out over stylistic classification and other such music-nerd niggling; it ALWAYS comes down to THE SONGS, and No Warning has 10 of 'em that span a variety-spiced 42 minutes.

No barriers, just preternatural focus - VENOMOUS MAXIMUS are on the verge of mighty, mighty things with No Warning. We at SHADOW KINGDOM are banking on the band to go BIG with this album, winning over fans of such bands as Mastodon, High on Fire, Grand Magus, Pallbearer, and other heavyweights who've paved their own "path of doom," but doing it in their own, supremely special VENOMOUS MAXIMUS way. You've been warned about No Warning!