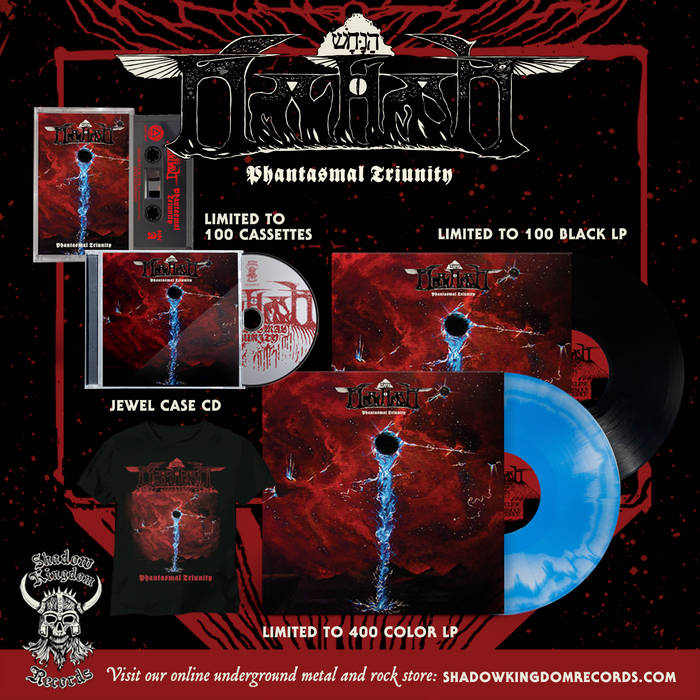 Release dates below are for Digital and IN PHYSICAL STORES only. These titles will be available before the release dates at www.shadowkingdomrecords.com

One of the most shockingly mature newcomers SHADOW KINGDOM has come across recently, NACHASH hail from Norway and released an EP, Conjuring the Red Death Eclipse, in 2015. Granted, their country of origin might tip you off that the band indeed play black metal, but that's only half the story. For the NACHASH sound one is just as anchored in eldritch death metal, grimy but grandiose, as it is the most witching wave of early black metal: muscular and even a bit molten, the power-trio's patient pulse possesses an almost-poetic flow, above all betraying a keen understanding of epic heavy metal songwriting. Across each of these six mini-epics known as tracks, the 37 electric minutes comprising Phantasmal Trinunity in fact flow like a phantasm, wisping and winding wherever the wind may blow but with a most haunting grace, setting up moments of hypnotic tension before subtly seguing into a surge of dark 'n' dread-inducing glory. It all makes for a singular sensation, but if we're to drop any rare references, contemporaries could include Grand Belial's Key, Ares Kingdom, Mortuary Drape, Varathron, and Sacriphyx.

Deathly black metal? Blackened death metal? NACHASH know no borders nor easy categorization, nor do they care for fence-riding opportunists who don't truly heed the call of death. Enter their Phantasmal Trinunity and emerge enlightened and forever changed...