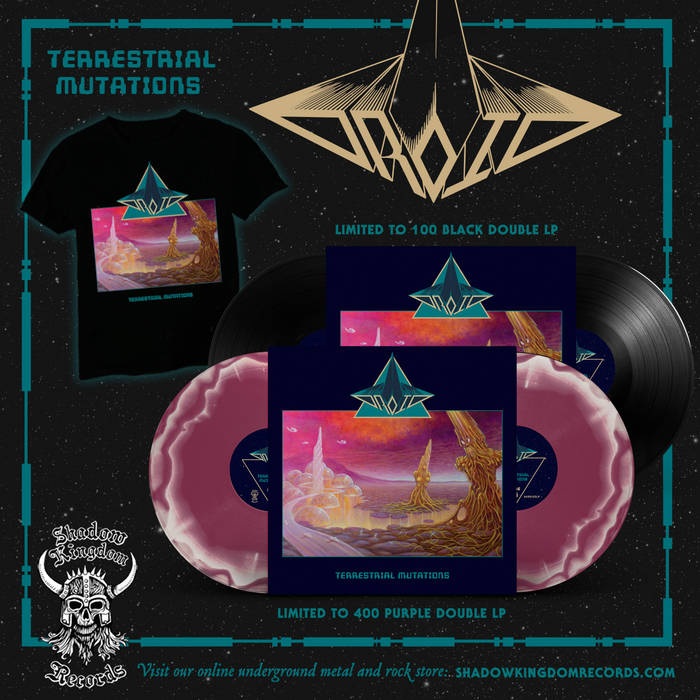 Release date is for IN STORE PHYSICAL DISTRIBUTION ONLY. The VINYL will be available at the www.shadowkingdomrecords.com store before the release date.

SHADOW KINGDOM RECORDS is proud to present DROID's scorching debut album, Terrestrial Mutations, on vinyl LP format. Originally released in 2017 on CD by Nightbreaker Records and then on cassette tape Temple Of Mystery Records, Terrestrial Mutations so impressed SHADOW KINGDOM that the label simply HAD to release it on vinyl. Mark our words, DROID's debut album is a modern classic in the making!

With enviable ease and effortlessness, DROID create some of the catchiest tech-thrash you'll ever hear. The signposts of the subgenre are all accounted for across Terrestrial Mutations - twisting time signatures, palpitating riff mutations, labyrinthine song lengths, and even that thinner style of production which highlights each player's performance - but unlike most tech-thrash, DROID create actual hooks that are both immediately memorable and infinitely challenging...and they create A TON of them across the album's 57-minute runtime. Sure, there's no shortage of dazzling/mind-boggling musicianship across Terrestrial Mutations (it comes with the territory), but this power-trio always puts the SONG first. As such, there's a certain spaciness - or, at least, a sense of space in terms of texture - to their alternately hummable/haunting hooks, an effect that's quite calming amidst all the technical trigonometry going on around them. Fittingly, the lyrical themes follow suit: "Abandoned Celestial State," "Mission Drift," "Suspended Animation," and of course, the album's title track among others. Additionally, while the production is more "airy" and sonic-sensitive, it's by no means any less powerful, ringing out richly with a sparkling sensation that simply serves to make DROID's mighty hooks that much more massive.

Again, DROID's Terrestrial Mutations is a modern classic in the making, and SHADOW KINGDOM couldn't be more pleased than to release it on vinyl!