by Angel Of Mercy 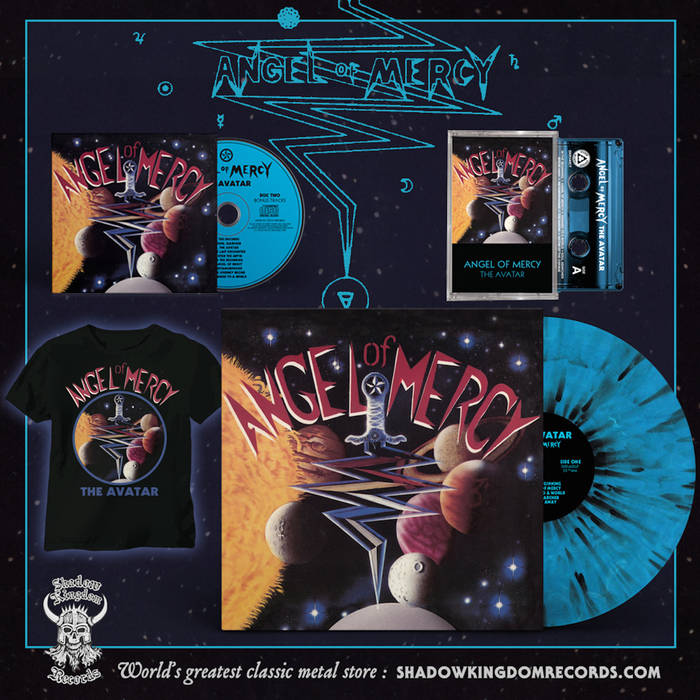 paul rote Thank you Shadow Kingdom!
Here’s to hoping for more of these classics to be released!🍻

Release dates are for Digital and IN STORE PHYSICAL product. These will be available prior to the release dates at the www.shadowkingdomrecords.com store.

At long last, SHADOW KINGDOM RECORDS is extremely proud to present the ultimate reissue of one of the cultest '80s metal records: ANGEL OF MERCY's lone album, The Avatar. Prized by many collectors as one of American metal's Holy Grails, the rarest of the rare, The Avatar is now being released in a 2CD version which includes the original album in its entirety and then a second disc compiling rare recording sessions from 1983 and 1992, an unreleased track from The Avatar sessions, and an old track re-recorded in 2015. Truly, this shall be a momentous event, and one SHADOW KINGDOM has been questing for since the founding of the label.

The story of ANGEL OF MERCY is a sparse but mysterious one. The band was formed in 1980 by vocalist/guitarist David St.James. Although he began writing songs then, it took seven years until he had a full lineup and got a record out. Back in the day, they rented out a huge warehouse in Las Vegas, and Vegas certainly wasn't a hotbed for heavy metal by any stretch of the imagination, but they would fill up that warehouse (which mainly served as their practice space) with around 200 people at a time and have these massive heavy metal parties. Eventually, they recorded only one album, The Avatar, which was self-released on vinyl as a private pressing, and was utilized more as a sales pitch to potential record labels than anything else. But alas, a label deal never came, and ANGEL OF MERCY faded into obscurity.

However, what they left behind with the lone monument of The Avatar is astounding to behold, still, some 30 years after its ill-fated release. A true document of true epic metal without aiming to be epic metal in the first place, The Avatar is a mesmerizing blend of magick and high drama, of mysticism and glory, sorrow and triumph, and all unselfconsciously so. ANGEL OF MERCY's main influences were KISS, Rush, Judas Priest, Black Sabbath, and Led Zeppelin. Strangely enough, they didn't hear Iron Maiden until after all the songs comprising The Avatar were written, so somehow, the band had crafted this highly melodic yet highly mysterious sound without hearing one of the form's most foundational bands. Similarly, if we're speaking strictly of US metal, The Avatar could be compared to early Manilla Road and demo-era Anvil Chorus, even though ANGEL OF MERCY were unaware of either band at the time. But those seemingly aeons-old intros on The Avatar that then patiently build into towers of epic metal majesty - those were primarily influenced by Led Zeppelin and KISS's proto-epic metal Music "From The Elder." It's important to remember that, no matter how popular and widespread heavy metal during the '80s seemed in hindsight, most of its bands were simply making this up as they went along, with no wider awareness, and The Avatar is a brilliant example of raw talent and unbridled ambition coalescing into a wild and weird but ultimately eternal document of glorious times never to be replicated.

In recent years, an original copy of The Avatar fetches anywhere between $500 and $1200 on the second-hand market. Well before that - actually, since first hearing it in the '90s - SHADOW KINGDOM has been wanting to release this Holy Grail in a wide edition. Tracking down the members of ANGEL OF MERCY was quite the Herculean task in itself since they all used pseudonyms. Eventually, that task was completed, and the original master tapes of The Avatar were acquired. This special 2CD edition has been remixed and remastered from those original master tapes, except for the song "Journey to the Master," which was either recorded over on the original master reel or it was simply lost, so that song here is in its original mix with mastering from a virgin cassette tape. Witness history, then, with SHADOW KINGDOM's reissue of ANGEL OF MERCY's The Avatar!